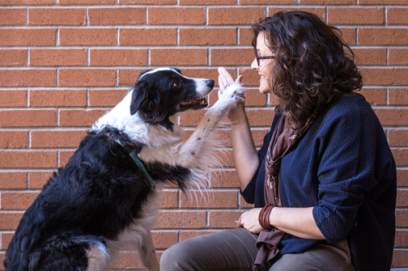 The interconnected lives of a dog and its owner are often mutually satisfying (Beck & Katcher, 1996). Yet, canine-human relationships are complicated; and dogs, whether due to issues facing their owners or the dogs’ own health and behavior challenges, may unfortunately wind up at the animal shelter (Protopopova & Gunter, 2017). It is estimated that over five million dogs enter one of 7,000 animal shelters each year in the United States (Woodruff & Smith, 2017).

Life at the Animal Shelter

While the number of dogs arriving at animal shelters is declining, as well as those that are ultimately euthanized (Rowan & Kartal, 2018), lengths of stay in the shelter are likely increasing as dogs await adoption (Protopopova, 2016). As such, shelters are becoming less like temporary ports in the storm for homeless pets and more akin to long-term orphanages (Barrett & Greene, 2015).

Susan & Jenna during their sleepover with Barret, at Best Friends Animal Sanctuary

Dogs experience a variety of potential stressors when they arrive and during their stay at the animal shelter, including disruptive sounds, restriction of movement, and loss of social attachments (Taylor & Mills, 2007). However, welfare interventions carried out at shelters show that spending time with humans reduces canine stress. Regardless of activity, be it petting, playing, or simply being present in the same room, human interaction can improve the welfare of shelter dogs when compared to remaining in or being removed from the kennel but without a person present (Shiverdecker, Schiml, & Hennessy, 2013). While the benefits of these interventions, such as reductions in cortisol (a hormone involved in the body’s stress response system), do not necessarily persist when dogs return to their kennels, researchers have speculated that longer periods of interaction with people would likely have increased and longer-lasting benefits (Coppola, Grandin, & Enns, 2006).

Temporarily leaving the shelter is a simple yet promising way to provide increased interaction with people and improve the welfare of dogs awaiting adoption. To evaluate the effectiveness of this approach, Erica Feuerbacher from Virginia Tech University and I first traveled to Best Friends Animal Sanctuary in Utah. The Sanctuary has a sleepover program where dogs leave the shelter for a night with a volunteer, stay at the volunteer’s home, and come back the next morning. To measure stress, urine was collected for the analysis of cortisol and we compared these levels before, during, and after sleepovers. When we expanded our study and the length of the sleepover to two nights, we worked with shelters in Arizona, Montana, Georgia, and Texas. 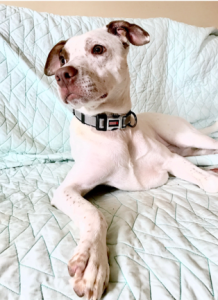 Harry, a sleepover dog from the SPCA of Texas

What did we find? Just one or two nights out of the shelter significantly reduced the cortisol levels of dogs, although the magnitude of the effect varied across shelters. Dogs’ in-shelter values after sleepover were not significantly lower (or higher) than their initial in-shelter cortisol values, thus the benefits of the sleepover were impactful but short-lived. Additionally, we found that dogs’ longest periods of rest occurred during the sleepovers, and that resting bouts upon return to the shelter were still longer than before the sleepover. Thus, our impression is that these sleepovers function much like weekends to the workweek. They don’t eliminate shelter dogs’ stress but give them an opportunity to rest and recharge.

Furthermore, we were able to detect differences between shelters when comparing their average in-shelter cortisol values. Considering the diversity of shelters in our study, it is certainly possible that as yet unstudied factors, such as dog density, kennel conditions, husbandry, and/or enrichment programs could contribute to the overall welfare of shelter dogs and should be explored further.

In recent years a number of research groups have investigated the kinds of interventions at the shelter that can improve the welfare of the dogs that live in them (Coppola et al., 2006; Menor-Campos, Molleda-Carbonell, & López-Rodríguez, 2011; Shiverdecker et al., 2013). These kinds of out-of-kennel interactions may provide temporary relief for dogs in shelters, but it is also possible that changes in shelter design or daily procedures may  provide benefits in stress reduction.

Beck, A. M., & Katcher, A. H. (1996). Between pets and people: The importance of animal companionship. Purdue University Press.

Woodruff, K. A., & Smith, D. R. (2017). An estimate of the number of dogs in US shelters. Available at: https://petleadershipcouncil.org/resources/uploads/MSU_Shelter_Census_ Presentation_NAVC_2017.pdf.

About the Author: Lisa Gunter, PhD, MA, CPDT-KA is the Maddie’s Research Fellow at Arizona State University in the Department of Psychology and conducts her research in the Canine Science Collaboratory with Clive Wynne. Prior to pursuing her doctorate at Arizona State University from which she graduated in May 2018, Lisa worked for nearly a decade with dogs, both those living in animal shelters and with their owners. The goal of Lisa’s research is to better the lives of shelter dogs. To this aim, she has investigated the perceptional influence of breed labels, what breeds and breed mixes are present in animal shelters, post-adoption interventions focused on owner retention, temporary fostering of dogs awaiting adoption, and identifying behavioral indicators of welfare for kenneled dogs. She has published her research in scientific journals and presented her findings at numerous conferences.

The ISAZ Student Blog is posted quarterly  and each post is authored by a different student member of the International Society for Anthrozoology. Interested in authoring a post? Please see our submissions page for details on how to apply.